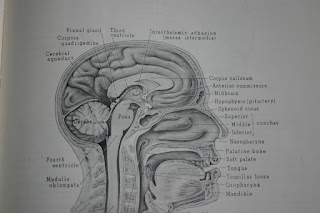 Image is a courtesy of Morguefiles

Staying Connected
(A fiction story crafted from a Trifecta prompt)

"Hurry up Joseph, we only have a little time." Katie stood at the foot of the bed where she could easily see the doorway, just in case.

"I'm moving as fast as I can Katie, give me a break." Joe said without taking his eyes off of Uncle Sherman's head.

They spent their first four years of medical school in the same classes, with top grades and bright futures, so why were they taking such a tremendous risk now?

"Katie, I need you to hold his scalp back for me." Joe said.

Katie's face twisted up like a pretzel, "How in the hell am I supposed to watch the door AND hold his scalp at the same time?" Her frustration coupled with fear as she moved to the head of the bed.

"Just do it and shut up. Joe said.

Uncle Sherman had been a genius when it came to the development of technology aids for brain trauma patients, Katie wondered how he would feel about what they were doing. If it worked, they would be able to keep Uncle Sherman's ideas alive with his own technology.

The whirr of the Dremel was fairly quiet, but to Katie, and Joe it sounded like a chainsaw on a giant Redwood.

"Just a little more… yes, we're in!" Joe said, almost too loudly. He brushed the sweat off of his temples and peeled back Uncle Sherman's skull. "If this works, we can get his brain to the lab without ever setting off the alarms to the nurse's station." The pause between his words were excruciating for Katie, who was already back at the foot of the bed watching the doorway. "If it doesn't work Katie, we will have just a few minutes to get the hell out of here without getting caught."

Joe carefully put one of the main connectors Uncle Sherman had designed into his brain, the digital readouts indicated that the frontal lobe, and parietal lobe were still functioning. "We've got it Katie!"


This week's word is:
brain (noun)

1
a : the portion of the vertebrate central nervous system enclosed in the skull and continuous with the spinal cord through the foramen magnum that is composed of neurons and supporting and nutritive structures (as glia) and that integrates sensory information from inside and outside the body in controlling autonomic function (as heartbeat and respiration), in coordinating and directing correlated motor responses, and in the process of learning — compare
2
a (1) : intellect, mind
Posted by k~ at 3:25 PM